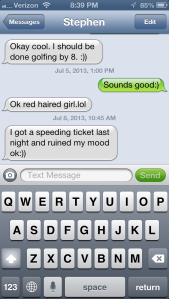 So my friend decided to put herself out there for the first on a dating website. After sorting through dozens of weirdo’s, we thought that the couple of guys who were left were pretty decent. After some texting and phone conversations she had a date scheduled with each of these decent fellas.

He invited her to “The Hill” on a Friday night. Ok, good start (or so we thought). They met at a casual restaurant and ordered some drinks. A couple of hours of decent conversation, none of it involving food, only drinks and she decided to call it a night.

He walked her to her car and suddenly decided after passing numerous restaurants that he had to urinate on the street. He even involved her in conversation while dropping his drawers explaining that he had a weak bladder. Needless to say, she decided not to chance a second date with him in case he decided to shit himself on date #2.

He worked at snails pace getting to the actual asking out stage after 3 weeks of texting but he seemed nice enough so she gave him a chance. They planned to go out on a Sunday at 8pm after he was done golfing for the day. She spoke to him on Friday and was waiting to hear from him for specifics. He never called or text on Saturday or Sunday so she, of course, did not reach out to him since he initiated the date.

Monday came and she received a text from him that read “I got a speeding ticket last night and it ruined my mood OK :))”

So apparently he was too cranky to even pick up the phone to cancel their date all because of a ticket. Imagine if something really bad had actually happened since he clearly has a mangina and not a penis to be so damn sensitive.

The subscription to the dating website has since been cancelled and she is enjoying being single for the summer.

Emerging From The Dark Night

Working through the Dark Night of the Soul to emerge as me.

...integrating Christian faith and knowledge in the public square